Don’t get it as it’s impossible to create mutex-based programs what make forward progress. It’s indeed possible to create mutex-based programs that do make eventual forward progress, and there are zillions of examples of it out there. Wait-freedom, loсk-freedom are theoretical properties that consider kind of corner cases. However, there are some practical implications as well:

So, what conclusions can we make?

First, if there is write sharing system ungracefully degrades, the more threads we add the slower it becomes.

Second, if there is no write sharing system linearly scales. Yes, atomic RMW operations are slower than plain stores and loads, but they do scale linearly in itself (by the way, cost of atomic RMW operations becomes smaller and smaller with each new processor generation, there are no fundamental reasons why they must be any slower and similar non-atomic read-modify-write sequence).

Third, loads are always scalable. Several threads are able to read a memory location simultaneously. Read-only accesses are your best friends in a concurrent environment.

If I would be asked to choose a single thing that you will get away, I undoubtedly would choose exactly this – the negative effect of write sharing on scalability.

A memory model in general is a very broad term, and it determines a lot of things. For example, such an evident thing like pointer size (8, 16, 32, 64 bits) is determined by a memory model. Another good example is what is (was) called… well, a memory model, if you remember those days, – TINY, SMALL, COMPACT, LARGE, FLAT. There are also other things like segmentation, paging and cache associativity.

What I am going to discuss here is memory models in the context of multi-threading/concurrency. There are 3 fundamental properties: Atomicity, Ordering and Visibility; and 2 levels: Compiler and Hardware. In order to implement and reason about any synchronization algorithm you need clear understanding of them.

There is also mostly mythical double-CAS (DCAS, or CAS2) which can operate on 2 disjoint work-sized memory locations – not available on most modern commodity hardware (however, you may encounter it in academic papers on lock-free algorithms).

Visibility determines when other threads will see changes made by the current thread, and whether they will see them at all. A lot of people endeavour to do something special in order to ensure visibility (like placing memory fences). However, in practice it’s the most boring property, because on cache-coherent architectures (read – on all modern commodity architectures – IA-32, Intel 64, IA-64, SPARC, POWER) visibility is ensured automatically. Namely, each write is automatically propagated to all other processors/cores in a best-effort manner. There are no ways to prevent nor to speed it up. Period.

On non cache-coherent architectures changes are indeed not propagated automatically, and you need to do something special. However, such architectures are rare and unique (I saw no such archs), so I think there is no sense in discussing them in general.

However, there is an interesting deviation – on x86 architecture non-temporal stores (made with instructions like MOVNTDQ) and stores made to WC (Write-Combining) region of memory are effectively non cache-coherent. That is, they will be propagated to other processors/cores only before execution of SFENCE instruction, MFENCE instruction, LOCKed instruction or other serializing actions.

So, a memory model determines what re-orderings are possible (relatively to program order). For required ordering ensuring hardware usually provides special instructions called memory fences/barriers, which prevent some re-ordering types around them. There are 2 types of memory fences – bi-directional (store-store, load-load) and tied to memory accesses (acquire and release). Bi-directional fences prevent one type of memory accesses (load or store) from “sinking below” them, while other type of memory accesses (can be the same, though) from “hoisting above” them. For example, store-load fence prevents stores from sinking below and loads from hoisting above (however, stores can hoist above it and loads may sink below it). 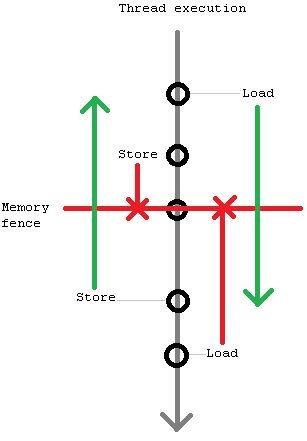 First, no mutexes on fast-paths ever (for slow-paths they are Ok, and even recommended because of the usage simplicity). There are several problems with mutexes. Mutexes limit and sacrifice concurrency to provide simplicity (anti-threads, sort of). Then, they provoke write-sharing (cache-coherence traffic) on every operation (even otherwise read-only). So, they just does not scale, forget about them.

Fifth, atomic RMW operations have some fixed associated costs. For modern Intel x86 processors cost of a single atomic RMW operation (LOCK prefixed instruction) is some 40 cycles (depends on a particular model, and steadily decreases). The cost comes mostly from frequently-unneeded embed full memory fence (so when Intel will separate atomicity and memory ordering, you may cross out this rule). However, the cost is fixed and does not affect scalability, so is far less important than above-outlined scalability-affecting points. Of course, all well-known single-threaded optimization rules are still applicable too. So we may include into the fifth point also algorithmic optimality and general implementation quality.

> The most important aggregate metric for a concurrent data structure is a mean number of cache line transfers between threads per operation.

Only after that one can also add:

Sometimes sharing can show up when you are not expecting it, i.e false sharing. This is important to eliminate false sharing too… etceteras… [insert here contents of False Sharing article]